A Legend: A Tribute to Eddie Van Halen 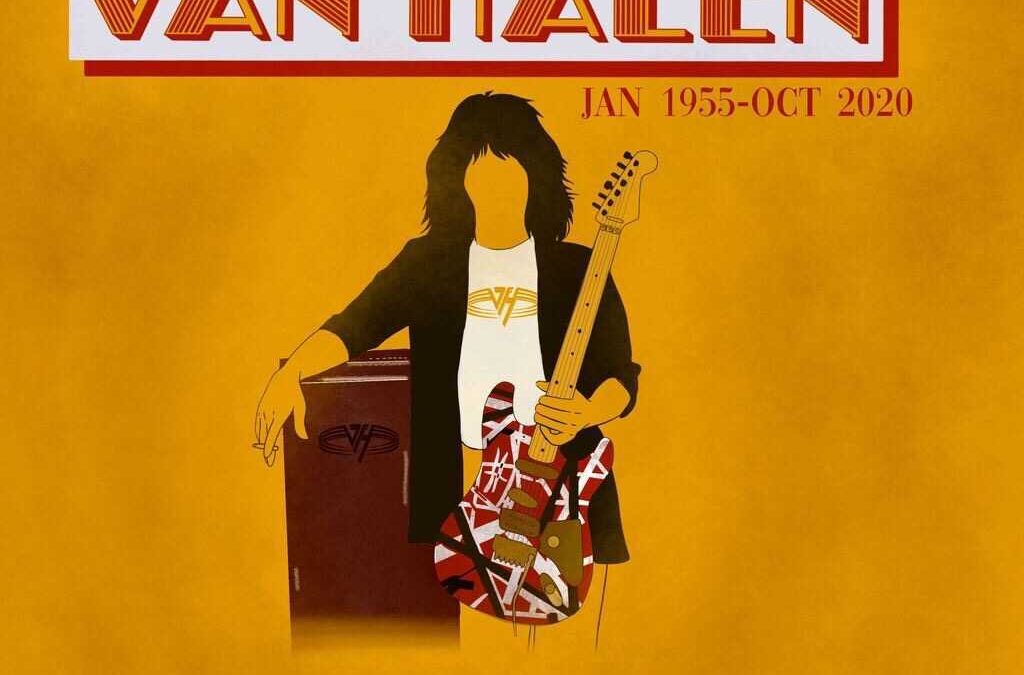 October 6, the world of Rock and Roll received sad news when Wolf Van Halen tweeted that his father, Eddie Van Halen, had “lost his long and arduous battle with cancer.” Eddie Van Halen had been battling cancer for about two decades, and he lost his life to it at the age of 65. Van Halen was a hero to me and to many others, and he will go down in history as one of the most influential musicians of all time.

Before becoming the famous guitarist and songwriter who helped give the rock band Van Halen its name and sound, Eddie and his brother Alex were just kids from the Netherlands starting their new lives in California when their parents forced them to take piano lessons. Even though they had a love for music and were talented, they hated learning piano and wanted to try other things. Alex decided to try guitar, and Eddie the drums. However, Alex ended up playing with Eddie’s drum set more than he did due to having more free time. When Eddie figured out that Alex had become better than him at the drums, he begrudgingly decided to learn guitar instead. This was a pinnacle moment in his life. He quickly became fascinated with his guitar and began to practice heavily. He has been recorded saying that Alex would go out with friends on the weekends but he would stay behind, drink a six-pack of beers and practice his guitar all day and all night. He was a young prodigy, a legend in the making, and because of his persistence, he was able to learn the guitar quickly. In 1972 the two brothers started their band. By 1973, they had their lineup after bringing on bassist Michael Anthony and singer David Lee Roth. At this time, Rock and Roll was still shaping into the unstoppable force that it became in the mid-1970s, and Van Halen was ready to become a part of it.

By the late 1970s, Van Halen had become increasingly successful. They stood out for many reasons, but what might be the biggest reason was the way Van Halen played the guitar. Since he was a self-taught guitarist, his style of playing the guitar was a little unconventional. He would tap heavily with both hands on the neck of the guitar, which is now known as “two-hand tapping.” This style of playing created a unique sound that was both influential and hard to imitate. It was this sound that made Van Halen stand out compared to other bands.

In 1984 Van Halen released their best-selling album, 1984. This was the band’s sixth album which contained some of their most influential and chart-topping songs. Songs like “Hot for Teacher,” “Panama,” and “Jump” defined what kind of band Van Halen was, and made the release of this album a defining moment for them. Ironically, the album only reached No.2 on Billboard, just behind Michael Jackson’s album Thriller. The album contained the iconic song “Beat It,” which featured a guitar solo from Eddie Van Halen. The coolest part about that is that Van Halen did this as a favor, and asked for nothing in return. “I didn’t want anything. Maybe Michael will give me dance lessons someday.” Van Halen said.

After the release of 1984, Van Halen rotated through different singers and bassists, but Van Halen was always there. He appeared in twelve studio albums, over five decades, and sold tens of millions of albums. In 2007, Van Halen was inducted into the Rock and Roll Hall of Fame. Eddie Van Halen became one of the most successful and influential musicians in history. He grew up looking up to guitarists like Jimmy Page and Eric Clapton, and now, we all look up to him the same way he looked up to them.

I grew up listening to Van Halen thanks to my dad, and I can recall countless memories of listening to them. Whether I was jamming out in my car, or at school or work, Van Halen has provided me with memories that I hold on to dearly. Without Eddie, I wouldn’t have any of those memories. I wouldn’t have moments of playing the air guitar while listening to “Hot for Teacher” to look back to. It might sound ridiculous that those moments were important to me, but they were! Life is so plain and boring without music, and Van Halen has provided generations of listeners with light and color in their lives through their music. For that, I, along with a world of fans are eternally grateful. We will remember and honor him through our memories and his music, and we will remember him not only as a rockstar, but as the good man, father, brother, and legend that he was. Rest in peace, Eddie.