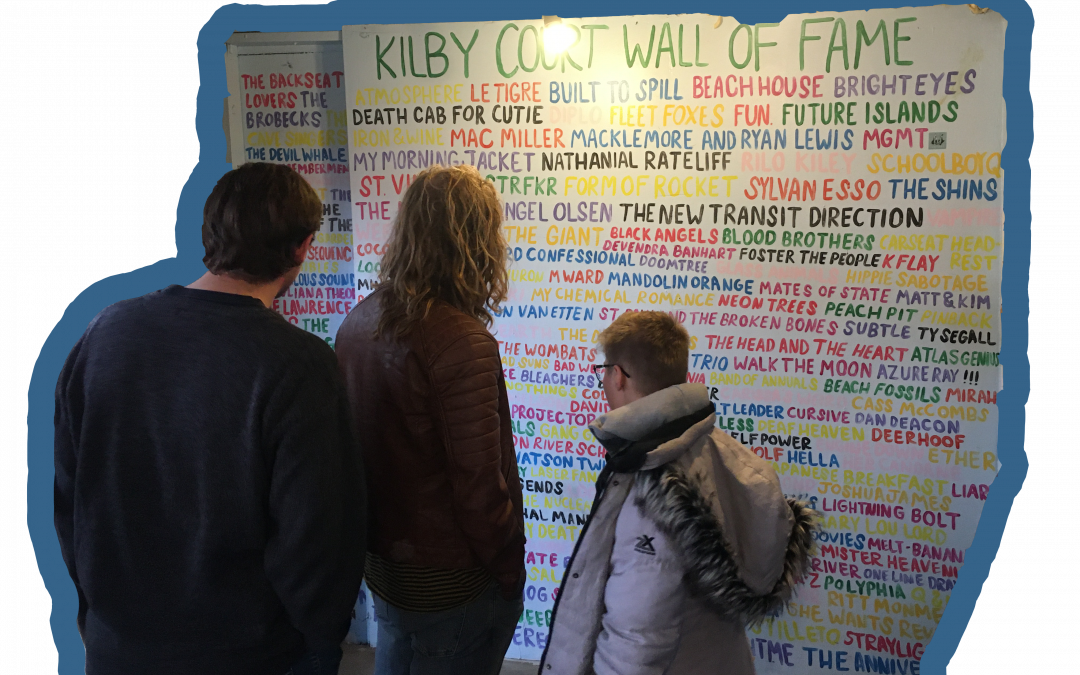 “I overheard she was 19/ She’s got a fake ID and a nose ring/ Those kind of girls tend to know things better than I do.”

The lyrics to local hit song “Kilby Girl” by The Backseat Lovers paint a narrative for the lesser-known music based subculture born within the conservative landscape of Utah, a state with many reputations.

What does it really mean to be a Kilby Girl? The self-given title is often found on Instagram posts featuring Utah music fans walking the line of outward rebellion to some viewers and youthful indie energy to others. Utah Kilby Girls, Kilby Boys or any genderless title to the Utah version of ‘hipster,’ probably refers to a sublet of indie, punk and alternative fans that have dived deeper into local genres, rather than being satisfied with the world-wide hits of The 1975 and Phoebe Bridgers. They spend their energy actively supporting a surprisingly large number of local bands like Ritt Momney, Adult Prom and Cinders, all of whom are based out of Salt Lake City, Ogden, Logan and yes, even Provo, Utah.

‘Kilby’ refers to Kilby Court; the iconic Utah venue located in the outer part of Salt Lake City. The venue is owned by the local music entrepreneurs of S&S Presents and has quite the personality of its own.

Other venues, like The Red Rock Amphitheater, who is undoubtedly the most iconic venue in Utah’s neighboring state of Colorado, feature fantastic sound technology, large seating areas and match markets that attract the biggest artists in the industry. Kilby Court however, is simply a roughly maintained, sticker-tattered garage with a small yard area featuring large trees and a strange Styrofoam gargoyle statue. To outsiders, it is underwhelming and lack-luster compared to the usual glamour within the concert landscape. To locals however, this venue is the safe-haven of expression, subculture and backgrounds that don’t always fit within Utah’s majority.

People go to Kilby Court to enjoy raw versions of concerts in an intimate stripped-back setting. The experience is preferred by Utah enthusiasts over the high-production concerts that the world anticipates. As Salt Lake City’s longest running all-ages venue, Kilby Court represents the roots of all Utah-based artists, like I Don’t Know How But They Found Me and The Aces. Fans have also enjoyed the likes of Death Cab for Cutie, Macklemore, St. Vincent, Walk the Moon and many others who sought Kilby as their “springboard stage for beginning local & touring artists alike.”

Utah music culture does not stop at Kilby Court. It has inspired similar venues across Utah, namely Whysound in Logan and Velour Live Music Gallery in Provo, to fulfil the needs of Kilby Girls in college towns, where music is used as an escape from world issues, angst and life in general. These venues act as common grounds for art and creativity, being the primary locations of Utah subculture formation.

The subculture of Utah matches the grungy style of these classic venues. Fans of local music in Utah don’t need much more than good music and genuine performers.

In an interview for Aggie Radio, Dallon Weekes, frontman of I Don’t Know How But They Found Me, spoke about the Utah music-scene.

“I think why it’s such a good scene here is because the people who make music here do it because they love to do it and they have to do it,” Weekes said. “There are no ulterior motives like becoming famous and a millionaire and drugs and, you know, perpetuating some lifestyle like partying and groupies and stuff. That’s less common here. People make music and they make art because they want to.”

Initially gaining his fame as the bass player of the pop-punk band Panic! At the Disco, Weekes said Kilby Court and Velour are still his favorite venues to play at, even after performing around the world.

Another insight into the Utah music scene comes from Scott Knutson, drummer for Drusky, who is a new player amidst dozens of other Provo-based indie bands.

“Something cool going on in the scene right now is there’s this garage-rock, almost emo, punk-fueled stuff, which is what I love,” Knutson said. “One of my favorite things is people getting out there and just saying ‘Screw you, I’m gonna play loud and do my thing and go crazy.’”

Knutson said, “I feel like people are into that now and I love that, but there’s still some people stuck in the old ways, But we’re tearing it down. Make way for the usurpers! We will ‘usurp’ you!”

These “usurpers” who say “screw you” characterize the Utah music scene and mark the attitude of its Kilby fans. Despite living in a state with many stereotypes, some true and some exaggerated, local music fans don’t wish to be defined by one stereotype, one mindset, one political-view or one religion. Music for Kilby Girls is a form of pure expression, stripped of expectations, just like its iconic venue.