An Inside Look at The National Parks: On Starting a Band in Utah and What Keeps Them Coming Back to Logan 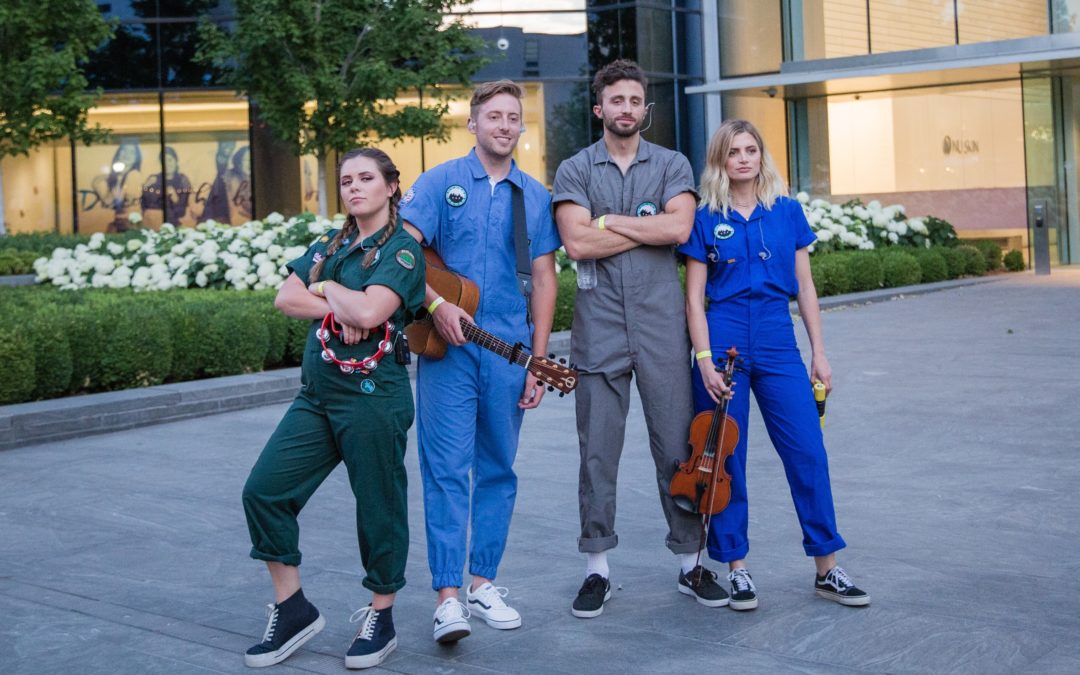 LOGAN, UT – When Provo band The National Parks took the stage at Willow Park in Logan July 24, the crowd began dancing, jumping and singing along from the first song all the way through the end of the encore.

Frontman and creator of the band, Brady Parks, was alive with energy throughout. After the performance of one of their most beloved songs from their debut album Young, Parks enthusiastically asked the crowd “How did that feel?” As an active participant at this show, I can truthfully say that it felt wonderful to be surrounded by strangers who joined together to sing words we all knew. We suddenly had something in common.

Since the group started in 2013 with the release of their folk-pop freshman album, they have: toured around the United States selling out shows, independently released two additional albums, been named City Weekly’s “Band of the Year” in 2016 and have played festivals such as SXSW, School Night at Bardot’s and Musikfest. An impressive rap sheet indeed from a group of young musicians from Provo, Utah.

Before all of that, Brady Parks, who got his start in the Provo music scene by doing open mic nights, was introduced to Sydney MacFarlane through mutual friends.

“We just started jamming together and it was a perfect fit.” Parks said in a phone interview July 26.

The remaining band-members came to the group in similar ways. Megan Parks, violin, was introduced by mutual friends. Drummer Cam Brannelly was the drummer of another Provo band who happened to be parting ways while Parks was looking for a drummer of his own.

They gathered interest for their group by embarking on a guerrilla marketing campaign around Provo. They printed off a few thousand flyers bearing the message “Who are The National Parks?” This campaign led up to their first show as a group at the Velour in downtown Provo. After that, they were off.

Now, along with their new album Young followed by the release of their most popular single “As We Ran” in January 2014, the band was seeing international success. Their song “Helsinki” was even featured on NPR’s “All Songs Considered” in January 2015.

Parks attributes a lot of this success to the fact that they got their start in Utah.

“I feel really grateful that we started in Utah,” says Parks. “I think in somewhere like Los Angeles or one of those big music cities it’s easy for a band to get lost. But in Utah I think there’s opportunity for bands to grow and to play in front of a lot of people. And I feel like bands at our same stage in Los Angeles might not have even had a chance to play.”

The National Parks are not unfamiliar with large crowds. Most recently, they headlined Provo’s Rooftop Concert Series. Their show boasted crowds of over 10,000.

In 2017, they headed out on a headlining tour of the United States in support of their newest album, Places.

Where Young is folksy and evokes a feeling that makes you want to go outside, Places is its indie-pop older sibling. It makes you want to dance around the room. That feeling is evident at their live shows. They could be compared to bands like Smallpools, the Lumineers or at times Passion Pit, to name a few.

Places hits like “Esperança” and title-track “Places” are light-hearted and danceable. You can’t help but jump up and down when you hear them. In fact, at their 24th of July show, it was encouraged.

Yet, from the same album, songs “1953” and “Penny” can slow you down and evoke a feeling that makes you want to snuggle up with a loved one. They’re the kinds of songs that people whip their phone flashlights out for at the live shows, but when they get home after the concert and really listen to the words, they speak to them in a new way.

Parks attributes a lot of the group’s success to the 2017 Places tour, and encourages any band starting out to not be afraid to go on tour.

The National Parks also have a lot of experience with the local music scene. Though their home is Provo, the group are no strangers to Logan.

One of their earliest shows was at Logan’s very own WhySound. Additionally, The National Parks have played a packed-full Eccles Theater during Logan City Limits and several on-campus shows. They opened for Mat Kearney during the USU End of Year Bash in 2017, and of course, played during Logan’s 24th of July Celebration at Willow Park this year.

“Honestly, Logan is one of our favorite places to play, and I’m not just saying that.” Parks says. “Every time we play Logan, it has been one of the funnest shows we’ve ever done.”

“There was so much energy and dancing and jumping from the crowd. And it was such a beautiful venue,” he continues, talking about his personal favorite show at the Eccles Theater in April 2017. “Everything was clicking that night. It was one of those magical shows where you walk off the stage and you’re like ‘What just happened?’ It’s always a place we look forward to playing.”

When they’re not touring or recording new music, Brady and Taylor Parks are enjoying life as newlyweds. Sydney MacFarlane lives in Kaysville, Utah, and is a mom to a 4-year-old. She is currently expecting her second child and is due in January 2019. Adding family life on top of being in a full-time band can get tough, but Parks says that it’s worth it to them in the end.

“You experience the highest-of-highs when you’re onstage and connecting with all these people and feeding off their energy. But then you have the really hard times when you’re driving, and the van breaks down and there isn’t a lot of money to fix it and you have to figure it out. Things get pretty challenging pretty quick” he says.

“Something that’s kept us going is that we want to use our music to help uplift people.” he continues. “All the time we get messages from people telling us how the music has affected them, and it blows my mind. It’s a really humbling thing. And that’s really what it’s all about for us. Those little reminders really keep us going.”

When asked about whether their band had adopted an official National Park of the National Parks, Brady Parks just laughed. Though many would assume it’s the Tetons (a reference made in their song “As We Ran”) Parks says he is partial to Zion National Park in Southern Utah.

Small personal homages are made to specific National Parks in what the band members wear each night. Each member wears patches on their personalized ranger outfits to remind them of the lands from which they got their group’s name. Parks has patches of  Zion National Park, Arches National Park, and Grand Tetons National Park to name a few.

“We were definitely going for the Park Ranger look,” Parks joked.

As for the future, The National Parks are currently working on new music. Though nothing has been set in stone or is being officially announced quite yet, Parks says “new stuff is in the works for sure.”