An Interview With Cinders 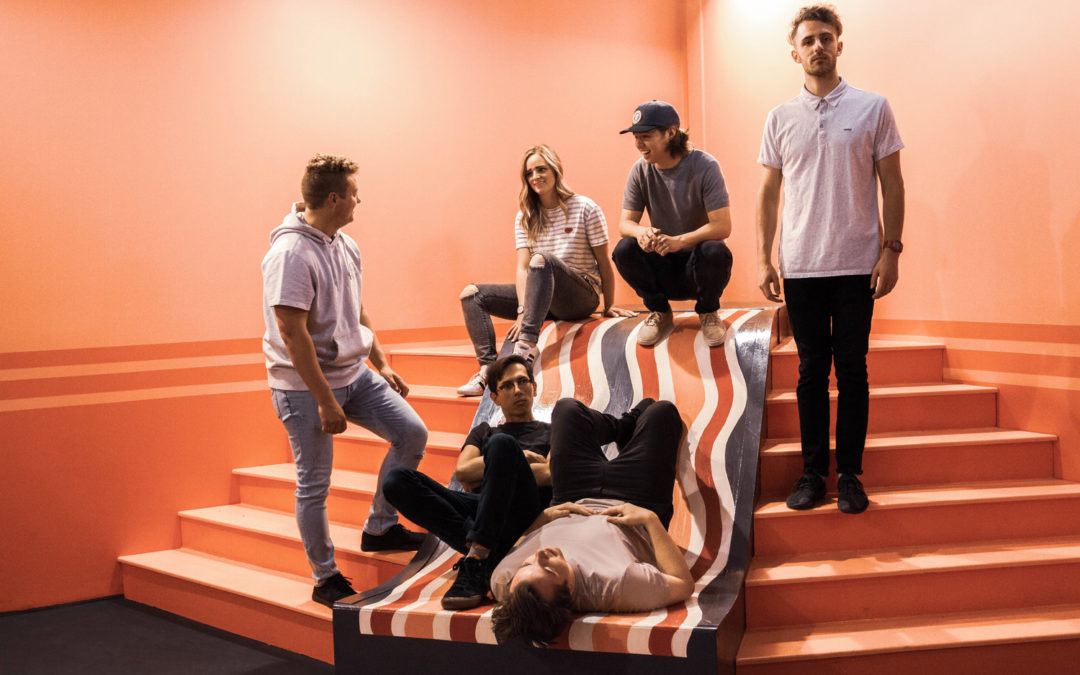 One of the many bands set to grace USU’s Big Agg Show stage on August 30 is Salt Lake City’s own Cinders. After an eclectic formation, the band’s lineup currently stands at Austin Harris (keyboard/saxophone/melodica/accordion), Adrian De La Cruz (bass), Brad Bennett (drums), Montana Smith (vocals/electric guitar), Chelsey Powell (saxophone/vocals), and Jordan Zabriskie (vocals/acoustic guitar). We got the chance to chat with De La Cruz and Zabriskie about the band’s upcoming album Looking Forward to Looking Back, what music projects they were a part of before Cinders, and the contrast in music taste among the members.

Where is everyone originally from and how did you all end up in Salt Lake City?

Jordan: Funny as it is, the only two of us that aren’t originally from Salt Lake City are Adrian and myself. Adrian grew up in Southern California and I grew up just outside of Chicago. I think life just took us to SLC, all of us love it. We’re huge fans of the mountains and the vibe that SLC has. One of our songs, “Call it Home,” as cheesy as it is, can reflect really any love in your life, whether it be someone or a place. For us, though SLC may not be much to brag about, it really is where we call home.

Adrian: I like to joke too that Tinder brought us together.

I saw that in an article or interview that you guys did, it was like “short answer: tinder” and I was wondering if you could elaborate on that.

Adrian: Its a total joke, 100% a joke. We were doing a magazine write up one day and someone said it and we just thought it was so funny and it kinda stuck. We were playing at this local record shop, and they asked us the same thing, and I think it was Jordan or Montana who said Tinder like we “swiped right” on Brad. So Jordan, myself, and Montana all met through high school. Then Jordan and Austin met while out in Nashville and Chelsea married into the band, and we joke about that. We met Brad actually through Instagram. He sent us a message one day asking if we were looking for a drummer, we said we were auditioning people. There was no one actually auditioning, no one was there, but you know, it’s a little more fun to say Tinder.

You guys have mentioned in passing that some of you have been in other bands before Cinders, could you guys elaborate on who was in what kind of project prior and what you bought from them over to Cinders?

Adrian: There’s a whole wide range of stuff, mixing from jazz band to acoustic duos to hardcore punk bands. Myself, I played in a hardcore group for a long time. Jordan and I also made a two-man ska band that never left the basement once, we switched between guitar and drums. I played in a hardcore band for years upon years in high school and I think what that really bought was not musicianship, like what other members brought with their jazz band aspects, but a lot of energy that you see on stage. We like to joke, but not really joke, that we take cardio pretty seriously, and if you’ve ever seen us live before you’d definitely get why.

Jordan: Like Aiden was saying, we used to actually play in one of those acoustic bands, we did a lot of acoustic music together. That’s where a lot of our softer side of our music comes from, is from our background in the singer-songwriter style. We’re really upbeat, we’re really energetic, you come to a show and it feels like a punk show but the music is much easier listening-

Jordan: One of the biggest things is just how much each of us has put into the new record that we’re working on. Not one of these songs is finalized until every one of us has put our part into it. We love our first record and we’re extremely grateful for where it’s brought us. We’re so grateful for the fans that love that album and continue to listen to it, share it, and message us and tell us how much it means to them. But for us, it was kind of a trial of finding our sound and figuring out what we wanted to do as a group of musicians. With this new record, it really reflects how we are life. The songs are much heavier, they’re much more energetic as well as emotionally heavier. They have much more of a personal meaning to them and personal stories attached to them rather than our first record that was a little more open-ended, where you can kind of take your own meaning out of it. Which you still can still do with the new songs, but these are directly correlated with stories of our own.

Adrian: Also, going along with how we grew as a band, touring and spending countless hours together and hours on the road with one another definitely. You grow a love-love and a love-hate relationship. It can get stressful driving together for weeks on end, but you just really grow as a band and as friends.

Did you guys do anything differently while working on Looking Forward to Looking Back compared to Cinders?

What’s different with this one, rather than recording the drums ourselves, we went to a different studio this time to have them done. We’re working with a mixer named Ed Ackerson who’s over at Flower Studio in Minneapolis. He’s incredibly talented, has worked with some of our favorite musicians and artists that we really look up to, so we knew he had to be the one to mix it. With the last record, we had Alan Douches of West West Side Studios master the record and we knew we wanted to go through him again because of the crisp, clean sound that he brought to the final piece. But the biggest thing is really Ed, having him mix this record has been a game changer.

Adrian: And as for the songwriting process, probably pretty similar like Jordan was saying earlier. The songs aren’t done until our personal touches are on it. I think the big thing we incorporated is just realizing how talented of a musician Chelsey is. We have Chelsey on our first record, but primarily playing horns and stuff like that, she’s a great sax player. Then we asked her to go into the studio one day to lay down some backing vocals and we realized she has like flawless pitch and we were like “why don’t’ we utilize this more,” so we definitely incorporate her more on our record.

Where there any particular artists or albums that you guys were listening to while working on the album that you think had a significant influence on its sound?

Jordan: We’ve been listening to a lot of Manchester lately. On this last little tour we did, I’m pretty sure all of us at one point watched the documentary on their latest record. Yeah, Manchester is a huge influence, but you don’t hear it. There are six of us in the band, very different tastes. I mean for all six of us, can you think of a band that all of us agree on?

Adrian: The Head and The Heart

Jordan: Okay, The Head and The Heart. I’d say those are the only two we all agree on.

What are some bands you don’t like but someone else really loves?

Jordan: Oh, I have an answer for that. A good majority of the band really enjoys Twenty One Pilots, and unfortunately, for me, I absolutely hate them.

Adrian: As a band.

Jordan: As a band. As people, I think their story in incredible and their work ethic is amazing, but the music itself I do not like.

Adrian: The Front Bottoms, most of us love The Front Bottoms. Actually, everyone but our drummer Brad and he openly makes fun of them every time we listen to them, he’s like “their drums just aren’t cool enough.”

Adrian: I closet love T-Swift (Taylor Swift), so I write a lot of pop stuff around T-Swift but that’s a whole different story.