An Interview with Tyler Harris of Mojave Nomads 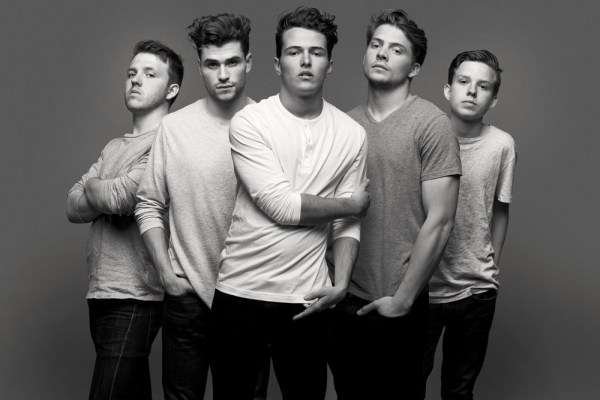 To promote their show this Friday with Roseburg, a celebratory concert for College Radio Day, Mojave Nomads’ frontman Tyler Harris (with special guest Hendricks the dog) sat down with Aggie Radio for an in-studio interview regarding life for the band and what the future looks like. The Ogden based quintet consists of Harris, Cole Eisenhower on percussion, Mason Hill on keys, Colter Hill on guitar and Bryton Bell on bass.

What is your favorite meme?

TYLER: I use the one a lot that goes “haha, unless…” but my favorite meme I think is anything that has to do with Shila Labeouf. I love that one.

What does Mojave Nomads have coming up that you’d be willing to share?

T: So we just got free! We’re free little indie boys so we can release whatever we want now. We have a lot of recordings we’ve been sitting on that we can now start working on. We’re writing again and playing shows! We’ll see where the wind blows us.

If you could have any superpower, what would it be and why?

T: To be able to travel through space and time because that’s like, the coolest one ever. You can freeze time, you can teleport, you know? It’s all relative.

If you could play with any band or artist, dead or alive, who would it be?

T: I would love to collab with Kevin Parker of Tame Impala or Donald Glover, aka Childish Gambino.

Describe your creative process. What do you do to prepare?

T: It depends on the project it’s for. For the Nomads, Mason and Colter will send me over music and I will write lyrics and sing over it and also add any other instruments I fell necessary. From there we take it to the jam room. A lot of songs I also just wrote and let them [Mason and Colter] make them better. I’ve been writing and producing a lot lately. For me, I usually start with drums.

How did you get your band together?

T: I’ve known Colter and Mason since I was six. We became next-door neighbors when my family moved to Utah. I’ve known them for a long time and was playing for other bands in high school. Colter and Cole were jamming as a two-piece and I ran into Colter at a Cage the Elephant concert. He was like, “dude, it would be really cool if we all got together and started a band!” So we called up Bryton, who has been really good friends with Cole since they were born. They were born a day apart. Mason came later when we decided we could use some keys.

T: Coke. Have you had the Orange Vanilla Coke? It’s amazing. I’m not super picky but Coke all the way.

What music is your guilty pleasure?

T: I wouldn’t call it a guilty pleasure, but a lot of people think it’s weird. I listen to a lot of opera. It’s not weird! Have you listened to pop-rock? I don’t think you have! Opera is just really beautiful and theatrical and I love it. I’m not guilty about it.

What is your spirit animal?

T: Hendricks, my Australian Sheppard laying at my feet.

In what ways would you say your upbringing has affected your music if any?

T: My dad and my stepmom were always listening to new music whenever they were doing stuff. One of the first artists I was exposed to was Prince, which my parents argued about because maybe a kindergartener shouldn’t be listening to Prince. Especially certain songs since he gets pretty graphic. My family can play guitar well enough to sing around a campfire and known a lot of country songs. It kinda just made sense for me to get involved.

What does music mean to you?

T: Music has always been the thing I do, whether to escape from something, to cope with emotions, to hang with friends. It is a very essential part of my life and an essential part of most people’s lives, I think. It’s like a universal language. Everyone has music. When I was in Vegas visiting my dad, one of my Uber drivers was a Ukranian jazz player and jazz, when communicating, that’s all that is. No matter the language, you can play together.

T: Just go out and do it. There is a lot of people in the scene, and people get caught up, but you can only control what’s in your orbit. Just do it and don’t care about what other people have to say. There are always going to be people who don’t like what you’re doing. Kick some ass. You’ve got this.

Mojave Nomads will be playing The Cache Venue on Friday, tickets for the show can be found on the venue’s website. You can find Mojave Nomads on social media @/Mojavenomads and their music on all streaming platforms.