An Interview with Roseburg 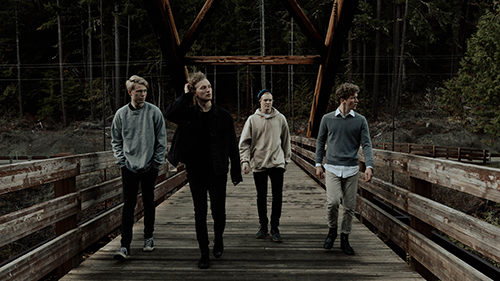 Aggie Radio was given the opportunity to speak with half of Roseburg to promote the band’s headlining show at The Cache Venue Friday, October 4. Keith Lambson, drums, and lead vocalist Zach Knell sat down with Chase Jensen during his radio show Songs That!

Last time you guys played at The Cache, you played an intimate and impromptu show after the Big Agg Show got rained out. What was that experience like?

ZACH: It was fun. Like, there were probably like forty, fifty people that showed up after the rain. We figured, “well, we’re here, so might as well.” We weren’t sure if it would be a high energy type of thing, but it definitely was a story to tell. We’re ready to come back into it this time.

For some of our listeners that maybe haven’t heard you yet or are new into the Roseburg scene, how did the four of you meet? How did this band experiment Roseburg get started?

Z: The band was originally myself and Keith and also my friend Sam. We were in a trio. We met while we were missionaries in Roseburg, Oregon. Fun fact: Chase was also there as a missionary with us! Everyone was always trying to get us to jam together because they knew we were musicians. We decided to move to Provo after we got back and recorded our first record together. “Identity Prices” was the first song that we wrote the night that we met so we kinda got going and would have never imagined we would get where we are now. That’s the story.

What is the craziest experience you guys have had as a band and out on the road or on a show?

KEITH: One time, Zach had a girl come up to him and ask if he could draw him nude. That happened at Utah State, actually. So… thanks, guys.

Z: I said no by the way. That was one of the craziest moments for sure.

So you guys have played kind of all over the place. You’ve played up and down Utah and into Idaho and Oregon. Where has been your favorite place that you’ve placed so far?

Z: I’d say we probably all have some different ones. Something that was really cool though was that we got to come back to my high school and play gigs for the entire student body. That was pretty nuts and was definitely one of the more high energy shows that we played. We love going up to Logan and Rexburg.

K: Rexburg is definitely one of my favorites. I remember the first time we played up there. It was one of the highest energy shows I’ve ever played to and everyone knew the words to every song. We didn’t know most of the people there but they knew us and that was really cool.

Z: I love college campuses. They always have such high energy. We love to see people singing our songs, people we don’t even know.

So you’ve started to make some waves in the local radio scene. One of your new songs features Kellin Quinn from Sleeping With Sirens, which is a pretty big collab. How did that collaboration get started?

Z: It’s been one of the top things to happen to our band so far for sure. Sleeping With Sirens is a band that a lot of us have been listening to since we were 13-years-old, a band that’s had a lot of success and a lot of albums sold. They’ve made national radio. Basically Kellin has become one of our best friends and has taken a manager/mentor role for our band. It all started this year when I reached out to him over Instagram and told him how much I appreciated his music. I told him about how the band got started and how we met in Roseburg which is only two hours north of his hometown in Medford. He was really excited that there was a band that claimed his hometown as our hometown. Since then, we’ve been really good friends. He’s given us a lot of guidance. When we originally wrote “RIP,” it just made a lot of sense to have him on the track, which was helpful because it would be really easy to classify us as an indie or a pop band in the Utah scene but we wanted to make it clear we were inspired by rock music and pure rock music. Kellin really helped us gain more respect in the rock scene. We really love that song; it’s one of our favorites.

For some of us who follow you a bit more closely on social media, we notice that three days ago you dropped a cryptic pic on Instagram. Is there stuff we can be expecting from you guys soon?

Z: Yes, of course. Everyone whose been following along with us this year knows that we’ve been working on our debut album “Righteous Punk” and that album is close to being finished and people should expect to see some things from that album. We’d love to get some of those records out sooner than later. Keep following along on our social media channels. Some of the things we have in store behind the scenes that are going on with our band are really exciting. We want all our friends in Logan and around the local scene to be the first to know. It’s always more fun when our friends are involved in our success.

What’s next for Roseburg?

K: Our goal is to have as many people hear what’s going on as possible, so we’ve been in touch with people who can make that happen. We’re pending on a few things. Playing lots of shows and making lots of music and we’re not going to say anything else.

Z: The best thing is to get more on a national level. We want to get on tour as soon as possible and see some new faces. There’s lots of new exciting things happening. Our record is almost done and we’re excited. We hope people are just as excited as we are.

Check out the rest of Chase’s show with the link down below and don’t forget to check out both Roseburg and Mojave Nomads at the Cache Venue tomorrow night. You can find Roseburg on all streaming platforms and follow them on Instagram and Twitter @/Roseburgband.