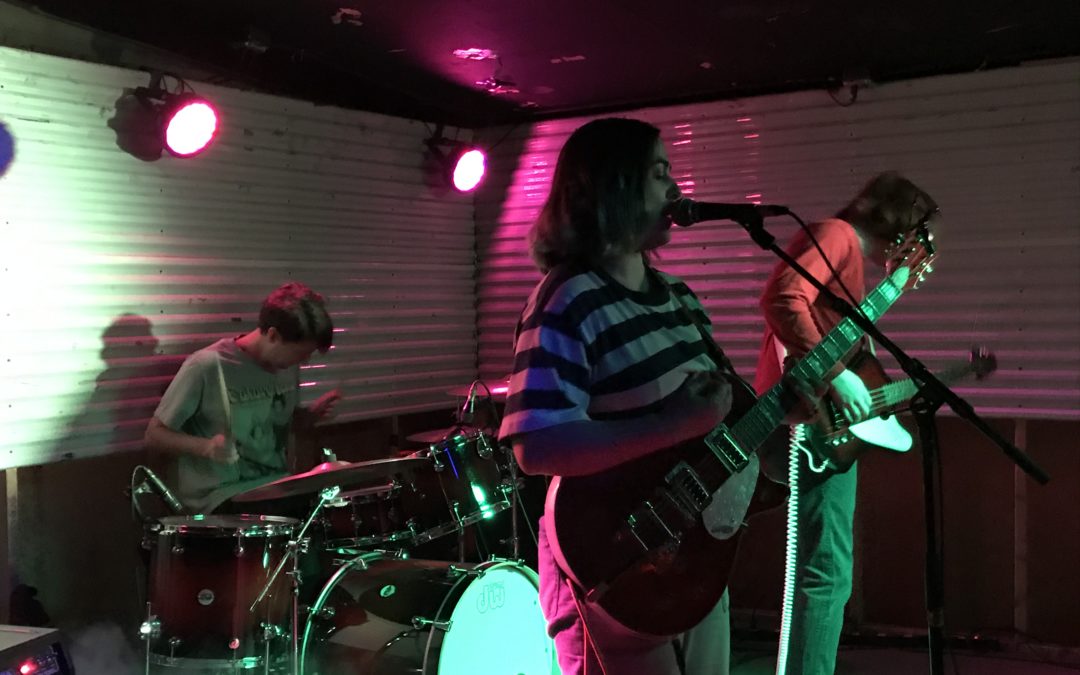 Despite being newcomers to the Utah music scene, it is obvious that Provo-based band Drusky is going places. Since forming a year ago, the group has already played countless shows, released an EP, and released four singles. Their magnetic music and personalities make them irresistible and a band you want to keep track of. Give Drusky five years, and you’ll be saying “Dude, shut up. I knew them before they got big.” I had the chance to sit down with members Mia Hicken (lead vocals/guitar), Scott Knutson (drums), and Dallin Haslam (bass) prior to their recent headline show at Kilby Court.

How did you meet and, eventually, form the band?

Dallin: Scott and I know each other because he drummed for my older brother’s band Greyglass.  Then we played in a project together called Pacificana. We also tried to do a duo, drum and bass math-rock type thing. It never panned out but it was gonna be called Closet Botanists. We’re really good friends. Then Mia Hicken over there was doing some solo project stuff in the Provo music scene and she wanted to do more band type stuff.

Mia: I posted on my Instagram story [and] was like “Hey, who wants to form a band?” and Scott was like “my band [Greyglass] just broke up” –

M: That was all about a year ago.

S: I think this all rolled out in February right?

S: We wanted to just get stuff out there so we could just go to shows and be like “Hey, listen!”

M: No time to dillydally!!

D: Mia brought in a lot of ideas that she had already formed and she was like “I wanna ‘band-ify’ this,” so we took it in and filled it out and were like “hey… this is kinda good.”

D: The dude who produces their stuff, Greg Downs — who owns Pale Horse Sound in Salt Lake — he just talked to us backstage and he loved it.

M: We just released four singles, and we’re playing new songs tonight. But now I’m out of things to write about, so I need another person to break my heart.

During the intro of “Nothing to You” you mention a few different band name ideas you’d cycled through before landing on Drusky. What was that process like and how did you decide?

S: That took a while.

D: Choosing a band name was probably the hardest part of being in a band.

M: It’s the worst, I never will do it again! If this fails I quit.

D: I think it literally took us a month just to figure out what we were gonna call ourselves.

S: And the thing is, we’re creative. We were thinking of ideas after ideas, we were killing it. But we wanted something short and sweet so I think Drusky kinda fit that bill.

S: We love dogs. So drunk husky is where it came from. [Mia,] I don’t know if you were here for this but we came up with a new band name that we should probably rename Drusky to, “Veloci-rectum and the Steaming Manholes.”

How have you evolved as individuals and as a band since you released your EP last summer?

M: Well, I’ve been doing solo music for about two years, but nothing could prepare me for how much more fun it is playing in a band. Honestly, it makes you grow as a musician more than any other thing can. Like, you can take as many lessons as you want but nothing is gonna compare to working with other musicians and playing live.

D: I think working with people is so fun and having to actively listen to what they’re doing and not overplay. Nobody likes someone who’s in a band and just playing over everyone else. [You’re] having to come together and become something that’s greater than the sum of its parts.

D: Yeah that’s true, we play a lot of Smash.

S: That’s a way that I’ve grown, I’ve gotten much better at Smash Bros because of Drusky. And I have a girlfriend now, which is awesome. Finally.I’m in a lot of other bands, but this band is unique because I feel like I have a greater say.

S: Yeah, we’re pretty communist. None of us are really “My way or the highway.”

M: When I decided I wanted to be in a band, I really wanted it to be a “band-band” and not just “Mia and a project.”

What is your favorite song to perform?

S: Yeah, that’s my favorite one.

S: I like “Alimony.” There’s a couple cool fills in there they just… taste good!

Do you remember a favorite show you’ve played together?

S: Wow, we’ve played a lot of shows together for being a band for only a year. Holy crap.

M: I still really loved that one Backseat Lovers show [at The Velour].

S: Like one of our first shows? That was sick because it was a full house. And we didn’t do anything.

M: I don’t know, I feel like each show we get a little better and I loosen up a bit more and we read each other a bit more.

D: At the end of last summer we organized this thing in Provo called Couchella. It was a two day thing, we got like 35 couches and put them in a backyard and invited all our friends’ bands.

S: That was one of the best shows, period.

D: It blew us out of the water, exceeded all our expectations. We had about 1200 people come over the 2 nights. That was super super fun.

Where do you draw inspiration during your writing process?

M: All of my songs are generally based on my own experiences. There’s a lot of breakup songs. A lot of inspiration comes from the culture I’m surrounded by. “Alimony” is about people getting married at 19. Provo dating culture.

M: Also, just like faith crises. “Heliocentric” is centered around beliefs and struggles with that. I guess everything is just about conflicts with self, conflicts with other people. So now everyone knows me too well.

What’s been the most surprising thing on your journey of being a band?

D: I was surprised at how well we fit with each other. From the beginning we had very good synergy and chemistry and our growth has been really exponential.

S: Something that surprised me is that we never have to book our own shows, the venues book us. I’m comparing to my other experiences where you gotta fight tooth and nail to get in. But we have to say no to shows! People really dig us.

Do you have any advice for people that want to start a band?

D: Just do it. Find friends start playing music together.

M: Come with an idea, throw some meat on it.

D: And talk to people, don’t be intimidated. Just get information from them! Everybody wants to talk.

What’s your take on the Salt Lake and Provo music scenes?

S: I’m gonna say the good stuff, then Dallin is gonna tear it down. But I agree with him. I think it’s really cool there’s so many bands and the music is evolving. When I first entered it was more like indie synth, Mumford and Sons-type vibe, but its evolving to be a lot more like indie bands, rock, garage rock. I think there’s a lot of music and its getting better and better and there’s some cool venues so its great! That being said –

D: So I think inherently in any establishment or system there’s nepotism for the older groups, like the grandfathers of the scene. And obviously we gotta pay our respects, but some people try and hold on to that. Something that’s cool going on in the scene right now is there’s this garage-rock, almost emo, punk-fueled stuff, which is what I love. One of my favorite things is people getting out there and just saying “Screw you, I’m gonna play loud and do my thing and go crazy.” I feel like people are into that now and I love that, but there’s still some people stuck in the old ways, and every generation thinks that. But we’re tearing it down. Sometimes, I see people out there who have overstayed their welcome, and its, like, clearly isn’t what’s happening right now. They’re just holding on to it. It’s like get out, make way for the usurpers! We will “usurp” you!

What does the future hold for Drusky?

S: I would say that, we hold the future…

M: You make us sound so cocky!

S: But the future is bright. I mean, we’re already booked for Kilby Court Block Party, lots of shows at The Velour, the opportunities haven’t stopped knocking.

D: In reality, it might be kinda turbulent. Scott has got some opportunities and some girlfriends elsewhere, and I’m graduating college this semester.

For more on Drusky, they can be found on Spotify as well as on social media @/druskyband.