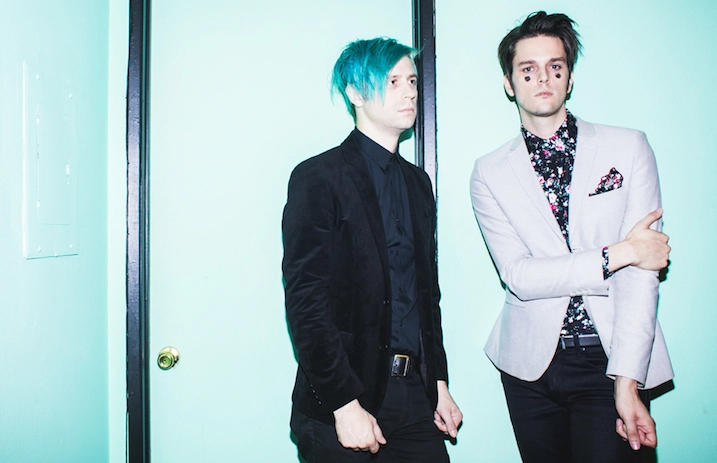 Dallon Weekes and Ryan Seaman are two talented musicians who have been around and have a history in dabbling between genres. Weekes is the former bass player of Panic! At The Disco as well as former frontman of Salt Lake’s own The Brobecks. Seaman has been the drummer of various bands, such as Falling In Reverse and I Am Ghost. When together, the two bring us I Don’t Know How But They Found Me: a lost eighties act consisting of banger bass lines, synth-pop new wave beats, and a passion for performance.

Aggie Radio sat down with Weeks and Seaman to talk about their challenges, their successes, the Utah scene and some other odds and ends.

How difficult, or maybe not so difficult, was it to combine your different sounds considering the genres you came from? You [Ryan] used to play in Falling In Reverse and then you [Dallon], obviously Panic! At The Disco, so where did that connect come in and how was it developing that?

DALLON: Well, I think it was a matter of disconnecting from that.

DALLON: Because we wanted to not sound like either of those bands. So it was a little more challenging on my end since I wrote for Panic, songs and lyrics and stuff. You have a certain style that might bleed through because it’s the same writer, but we try to make a concerted effort not to lean on past employment at all. Which can be a challenge.

Yes, I was going to ask if it was a challenge.

DALLON: Well, people are always going to, you know, point and remind us of those things, and that’s not always necessarily bad, but we just didn’t want to exploit that fact or take advantage of that.

Do you guys get associated with that still fairly often?

DALLON: Well yeah. I think we always will. It’s not something we try to lean on. We try to respectfully circumvent it as much as possible or as reasonably, I guess.

RYAN: I participated in the Brobecks back in 2008 and we kept in touch that whole time. I recorded Christmas songs, played drums on some Christmas songs on some tracks he [Dallon] wrote. We’ve always been in touch.

DALLON: This band is less about genre and more about playing the kind of music that we enjoy. It could have been really easy to come out of the gate and say “Hey, we’re from these bands,” but that seemed really disingenuous so we wanted to build our own credibility.

How have your backgrounds or the environment you grew up in influenced your music physically or emotionally?

DALLON: I try not to swear in my lyrics! Sometimes I think very rarely is it appropriate to do in songs. I think of it kind of like a free space in Bingo. You can still win a game of Bingo with that free space, but it’s not quite as satisfying. It’s just an easy way out.

RYAN: I grew up in Salt Lake City going to punk shows and some jazz stuff. I did competitions at BYU with our jazz group out of Park City. I just got exposed to a lot of music here which I think helped shape my repertoire.

DALLON: I think why it’s such a good scene here [in Utah] is because the people who make music here do it because they love to do it and they have to do it. There are no ulterior motives like becoming famous and a millionaire and drugs and, you know, perpetuating some lifestyle like partying and groupies and stuff. That’s less common here. People make music and they make art because they want to.

RYAN: What’s really cool too here that I learned from growing up is that it’s all about community. It’s all about people supporting each other. I feel like in places like Los Angeles it’s like, “How can I get ahead to the next step? Who do I have to step over?”

DALLON: Yeah, that whole area and that whole scene, and I’m not saying that city because, you know, I like things about Los Angeles, but it’s sort of the embodiment of narcissism. The culture, not the city.

RYAN: People around here bring you up.

What’s something you’ve learned within the past ten years that you would tell your younger self if given the opportunity?

DALLON: I would say don’t waste time on people that don’t care about you. That’s what I would tell myself. Because I definitely did that when I was younger. If time travel were actually possible, that’s the bit of advice I’d give myself.

RYAN: Never give up. I feel like with music, it’s like nine times out of ten, if you’re playing music, sometimes it doesn’t work out. But the ones who don’t quit are the ones who eventually get there.

DALLON: I appreciate that.

If you could play with any musician, dead or alive, who would it be?

RYAN: I would either say, Dave Grohl or Paul McCartney.

RYAN: Wouldn’t that be awesome?

DALLON: Oh yeah. I would choose either, although I would be scared to death, doing it, uh, either Elvis Costello or Ben Folds. I would be horrified to be jamming with them because I’d be like, “I’m not as good as you!”

When developing a concept for the band, how did you decide on the “lost eighties” narrative? And I know you talked a little bit about this in a previous interview.

DALLON: No, it’s fine! It’s a really common tale with musicians, you know? There have been so many bands and so many musicians who have come and gone and maybe never had that moment of cultural significance that they all hope for, but with things like Youtube and technology and the internet, you can discover those bands and it’s almost like them getting a second life. I’ve discovered a lot of bands that way. One of my favorite bands is The Sparks. Growing up I never knew about them, and only within the last five or six years was I able to discover their story and their music and I fell in love with it. It was all because of the internet and Youtube. So presenting our band that way, as a “forgotten act,” just seemed like sort of a fun concept to come out of the gate with. Maybe it was, on a subconscious level, a way of protecting ourselves and our egos in case it didn’t work.

What has been your favorite venue to play and why?

DALLON: My favorite venues are actually in Utah! One is Kilby Court in Salt Lake City and the other one is The Velour down in Provo. Been all over the world, played a lot of places, but those two are still my favorite spots.

Favorite eighties movie? And if you say Back To The Future, it’s gonna be a little bit of a cop-out.

DALLON: Is that a movie? People keep saying that but I’ve never seen it. (Laughs). If I can’t say that one, then I’d have to go with Dead Poet Society.

RYAN: That’s a good one. Honestly, looking back at it, E.T. was a big one.

What’s the funniest thing that’s happened to you while on tour or during a show?

DALLON: See, we get that question asked a lot, but like, nothing that crazy ever really happens on tour. It’s not as nuts as people would fantasize about it being. It’s pretty monotonous, really.

DALLON: The most fun part of the day is being on stage with each other. I’m trying to think of a story I could tell.

RYAN: What was really funny, one time, I was in this band a long time ago, and we were in like Fort Collins [Colorado] or something. There was this trailer we were loading gear in that had like, this wire, that like, pulls up to the trailer. This guy thought he was so badass, he was like “You guys are a bunch of” whatever, and tried to do a jump off of our trailer. He ended up getting clotheslined, which was really funny.

DALLON: Carrot cake, with that cream cheese frosting. I don’t really like cake, but like, that one and German chocolate cake are all I can do.

You’ve been to a lot of cities, which one has the best food?

DALLON: Ooh, good question! The best food I’ve experienced is probably in South America. They’re pretty consistent everywhere you go. I’ve never had a bad meal down there. City wise, I couldn’t really choose, but that area in general. Chile was really great, Argentina had really awesome steak. Like, the best burger I’ve ever had in my life was at an airport McDonalds in Argentina. I know that sounds ridiculous, but it was amazing.

DALLON: Avoid it! Don’t do it! It’s a terrible idea! We’re all idiots!

RYAN: True, true! Very true! BUT, I would say, and this is where I got started, in Salt Lake, just go to shows and get familiar with promoters, clubs, the local scene; that’s where it all starts.

DALLON: In my experience playing shows, play as much as you can, as often as you can, and hopefully you enjoy that. That’s the best way to sort of break into it. If you play a lot and get people’s attention, good things will happen. Treat it like it’s your job until it is your job.

And any advice from band management?

Band Management: Just volunteer or get an internship at a venue or a management job. That’s the quickest way to get your foot in the door. You aren’t just going to fall into it.

DALLON: It’s a very close-knit community, smaller than you think. And really the only way to get into it is to be around those people, meet the right person, build the right relationship. Unfortunately, it’s all who you know. And the only way to know people is by networking.

You can find I Don’t Know How But They Found Me on all social media platforms at @/Idkhow and their music is on all streaming platforms. Catch them at an upcoming show for their Night Heat Tour, tickets available on their website.

Interview is edited for clarity and conciseness. Full interview can be listened to below.