An Interview with Surf Curse 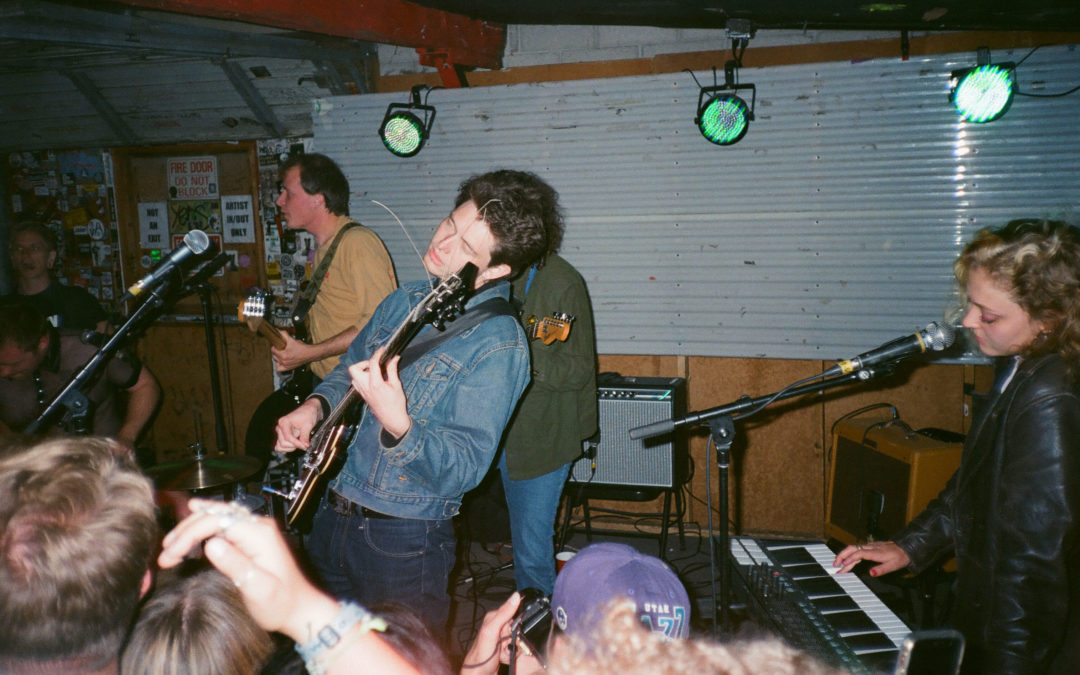 During the midst of their U.S. tour promoting their third studio album, Heaven Surrounds You, Surf Curse talked with Aggie Radio the evening of their sold out Salt Lake City show. We talked with duo Jacob Rubeck and Nick Rattigan about the artwork for the record, the movies that influenced it, and the effect their move from Reno to L.A. had on the writing process.

The cover photo for the album as well as the press photos were all done by Matthew James Wilson. How do you guys know Wilson and how did you decide you wanted him to take the photos? What was the creative process with him like?

Nick: Matthew we’ve known for a long time. I met him first because he did an interview with me when I was living in New York for his magazine, Forge Magazine. He did this whole spread in like this hour long interview, just this really in-depth thing, and I was like, “Who the hell is this kid? Why does he want to make like this huge spread on me?” We did the interview and we ran into each other on the street and I was with my friends and I was just like, “Do you want to come eat breakfast with us?” He came and we just talked the whole time and then started hanging out. He is a one-of-a-kind person for sure. His brain is always working and always thinking and always trying to do creative things.

Jacob: And it’s always for other people too.

N: Yeah. He just like, loves music, loves everyone –

J: – Loves artists. Whenever he believes in something, he believes in it wholeheartedly and his support goes wonders. It’s so inspiring just to talk to him for like a good 30, sometimes three hours.

N: I never worry that I’m not going to have stuff to talk about with Matthew because he just always has questions and is always talking about things. He’s always done press photos for us because he’s one of the best photographers we know. He started working at Danger Collective Records, so he works in that unit, so when it came time to shoot the album –

J: – We were all working close together.

N: He was just kind of the obvious choice for that and he killed it. He did a really great job with that and it was so funny just going through those photos. We probably took like 300 of the same photo of us on this bed, but in very slightly different positions, colors, and hues. He wanted to sit down and go through every photo and it was tedious.

J: Yeah, with the Nothing Yet photo, as soon as we saw it, we were like “That’s it.”

J: We did like three days worth of photos with someone. We kind of had an idea though and did the photoshoot and it was just so easy. But with Matthew, it was like, which one?

N: He was like, “Well this could mean something different if like, your head is down. When somebody’s looking at the album cover, they’re going to look into that. And if the phone is off the hook, or on the hook, or like, we just want to know how you guys want to style it in this way, because anything can mean anything.”

J: He’s somebody who definitely looks into every single detail.

N: I think we’re both really stoked on how everything came out.

Heaven Surrounds You was released on a Friday 13th and so was Nothing Yet. Did you guys plan that or was it coincidence?

I looked at a calendar of January 2017 [the release month and year of Nothing Yet], it was a Friday the 13th.

J: No, that was not intentional.

J: Yeah, very coincidental, it takes a year for an album to come out.

N: Getting stuff ready, videos and records. We’ve just been sitting on it for like a year. I think obviously Friday the 13th is a very attractive day, so many people release their record on that day.

In an interview you guys had with Flood Magazine you spoke extensively about movies that influenced the album and that it wasn’t so much about trying to make a song that sounds like a movie, but more so capturing content that you connected with. You guys have been doing that for a while, but with this release you have that going on with pretty much all the tracks. What is it with this record that made you guys want to connect it with movies more than just a couple songs here and there.

J: I think it was the amount of free time, where we were able to sit down and watch movies and consume them. Able to sit down and actually live our lives instead of being so busy on the road or like living in different cities or whatever, like we were just at a point where we had the free will to just chill and relax and take in these really wonderful movies.

N: I think for me, it’s sort of like self-serving. I think like maybe a year or two ago we had to start writing like bios and explain what our band is. We’ve always had this like movie hook or something, like we really love movies. We watch movies all the time and it’s influenced our music. We just really leaned into that for this record even more and adding all these different synths and like violent sounds, making it sound more cinematic rather than just have it casually slip in.

What inspired you guys to do the the summer film screenings of a couple of the movies that inspired that?

N: We were trying to think of ways to promote the album because we announced it, like, four months before it was even out and it just seemed like there was so much time.

J: And we weren’t allowed to play shows or anything like that, we had to wait until everything was locked in and out.

N: We don’t really have traditional means of promoting things like, I feel like we don’t really get picked up by major press outlets. We tried to just think of a fun way to promote the album while also giving kids a chance to see these movies. We tried to pick stuff that people wouldn’t watch on their own, something to get people excited about [the record] or kind of feel the atmosphere. I think it was so worth it too.

J: Meant to broaden the horizons.

N: It was so fun just sitting in the back of a packed theater watching a Bergman movie and have kids walk out and be like, “What the hell was that?” These kids just arguing over what it meant.

J: Or even them wanting to watch it again. That’s the point of it.

N: It is so much of our lives and our process of connecting with the music.

J: It was a great way to connect with our audience too, there were a couple cool kids who came to all three screenings and were stoked about every single movie.

This is the first thing you guys have written and recorded fully in L.A. since moving. I was wondering, not so much living in L.A., but how has no longer living in Reno influenced the process, with being away from where you guys grew up and started Surf Curse?

J: It’s another chapter. It’s just fresh, new and new people in our lives, different relationships, whether they’re romantic or toxic or whatever. We definitely see the dark side of L.A. too now.

N: I mean [“Maps to the Stars”] is about losing your identity in this, like cesspool of pretty much commodity. It feels like everyone’s just trying to sell something. There’s an artificiality to Los Angeles that’s definitely toxic and dangerous. But it’s also such a nice place to live and you get sucked into it really easily. I think that our lives have changed so drastically from living in Reno and playing shows.

It’s a whole thing. It’s our entire lives, like from the time we wake up until when we go to bed. We’re running this business of our band, as well as trying to keep that separate from writing the music and it’s super intense.

I’m really fortunate and grateful for everything that’s happening, but you can definitely get caught up. I think that part of the record is critical of that and almost trying to point it out. Even the sound of it is like different, we went to a studio for two weeks and never had the opportunity to do that. It just feels much bigger. Walking the tightrope a little bit.

J: Trying to keep our souls

It’s really interesting that you guys both have side projects, Current Joys and Gap Girls. What is the process with keeping those separate from Surf Curse? How do you differentiate your projects from Surf Curse?

J: We talked about this the other day. For me, Gap Girls is a personal thing, but it’s also more synth-based goth kind of stuff. I try to make it as different as I can from what we do. You have your thing about Current Joys –

N: Yeah, I forgot what I said.

J: What I said about you is, it’s kind of like your personal thing, like everything about Current Joys is about you.

N: And then Surf Curse is about us. If we write something and it’s like “Oh, this feels like Jacob could add something to this.”

J: I think with every project it’s about pushing ourselves creatively with that thing, you know, and whenever it comes to Surf Curse, it’s like how do we keep, you know, pushing our music and our sound or whatever, and we just kind of work on it together. Which is really fun and exciting of a process to do.

N: Yeah, it’s a vibe check with every song. And then sometimes we’ll bring Jacob a song and he’s like “No, that’s Current Joys.”

For more on Surf Curse, they can be found on Spotify and Apple Music as well as on social media @/surfcurse. They will be further touring to promote the record in 2020, show dates and ticket information can be found at surfcurse.com.

Interview is edited for clarity and conciseness.